Shawarma, also shaurma and other spellings, is a Middle Eastern meat preparation based on the doner kebab of Ottoman Turkey. Originally made of lamb or mutton, today’s shawarma may also be chicken, turkey, beef, or veal, cut in thin slices and stacked in a cone-like shape on a vertical rotisserie.

Shwarma is origin from the Middle East. Shawarma is prepared from thin cuts of seasoned marinated lamb, mutton, beef, chicken, or turkey. The slices are stacked on a long skewer. Lamb fat may be added to provide extra fat for juiciness and flavor. A motorized spit slowly turns the stack of meat in front of a heating element, continuously roasting the outer layer. Shavings are cut off the rotating stack for serving, customarily with a long, sharp knife. Shawarma may be served on a plate but is most commonly prepared as a wrap inside of a flatbread such as a pita bread. It is often served with diced tomatoes, cucumbers, and onions, pickled vegetables, and tahini sauce.

As we don’t have gears to cook Shwarma at home, I roasted it on a nonstick pan. Pita bread was bought from the store for Shwarma today. I have used chicken breast to make Shwarma, but chicken thigh, mutton, and other meat can also be used.

1 fillet of chicken breast (thinly sliced in the layer)

coriander or mint or parsley chopped or mix 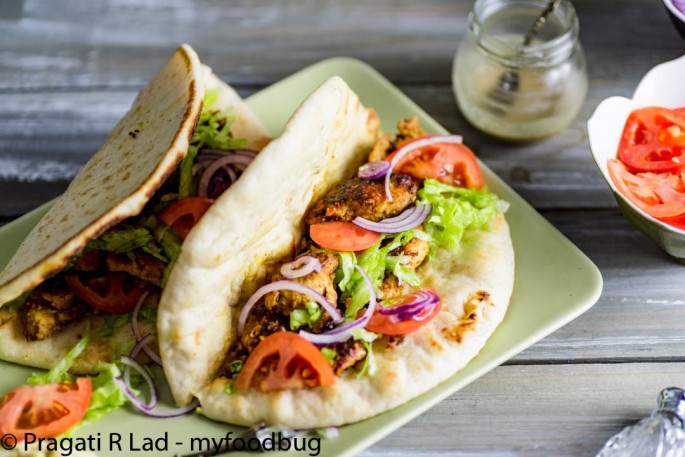 Thank you all for the suggestion you gave me for what snacking items to make for my visiting parents. I will be making few others soon too. This is “chilli milli” we call for the murukku made with potato and rice flour kneaded in butter. This gives a super buttery and rich taste to murukku. Once again you can drop few other snacking options as well. Love you all for generous inputs and loving me in Instafamily. . . . . . . . . . . . . . . #spices #food #foodie #chili#foodporn #healthyfood #indianfood #lunch #instafood #delicious #tasty #foodphotography #indian #yummy #foodblogger #foodgasm #homemade #love #extracts #spice #india #snacks #healthylifestyle #gew #picoftheday #bhfyp #foodloversindia #indiaclicksindia #foodphotography #myfoodbug